Well, it has been as interesting few weeks at Holder Towers. Not only did I have the brutal Jaguar XFR-S on test for a week but I also headed up to Northampton for round 3 of the DMAX karting championship.

The Jag was a triumph, it almost, and I do really mean almost, made it into the top slot of all time favorite test drives. The Maserati GT Sport still holds that crown though, I will explain why in another post perhaps. The big can was just sublime, the power plant was more like a power station, the power delivery was relentless thanks to the super charger…why do we bother with turbos when we can have power from the off?! But it was the fact the sportbrake was a legitimate family car that really made it so amazing. Yes it handled well, yes it puled like a train and sounded like hell on earth but the inner chuckles I felt when I managed to get the wife, 2 kids and a dog in with all their stuff in were joyous.

The karting didn’t go so well and you can read all about my misery on motor-heads.co.uk !

British motoring journalists like me are all starting to smile again now too, the weather is getting better, the rain may well not be so consistent and it means we can get out for some country road test drives on dry tarmac, brilliant!

As a UK motoring journalist there are a number of things that make writing about cars in this country unique. The first is the roads, I was driving along last week in a 550 BHP Jag XFS-R and realised I had not actually got my foot to the floor properly. Yes I had pushed the car, I was testing it, I had to, but the country roads just don’t allow you to really open up a car like that. If I lived in some US backwater I am sure I could find a big empty highway to thrash the living daylights out of it, but in Sussex? in the UK? not really. I am lucky enough to live in a rural part of Sussex and as such we have some stunning driving roads, great views, turns and dips, but no BIG straights. Of course, this doesn’t matter, I have said many times, the tougher the road the better the test. If a car still handles, performs and does what it is meant to on challenging roads then it’s a good car. If it only goes well on an airfield then it is a different kind of car, its a track car!

The other thing we have to deal with is speed limits, 70 mph really isn’t very much, stopping distances are based on cars that are 50 years old and so the speed limit it rather redundant too. Don’t get me wrong UK speed limits in towns are perfect, 30 mph is spot on, but some the motorway limits are not. Lets look at Germany…they seem to be going on OK with no limit at all!

What else does the UK offer a motoring journalist? High petrol prices; it’s not really a problem but it does make testing a big V8 over the course of a week rather expensive, and we don’t get paid much!

None of this is really meant as a moan, it is more just a few things I was thinking about while driving around. I am a UK motoring journalist and I am very proud to be so, but it might be fun to be one in the states for a week or two perhaps?

We do however, have such beautiful places to drive, I am not sure I would want to be land locked and never have the pleasure of a coastal road, or be somewhere flat and not enjoy romping a torquey lump up a steep hill. I won’t be moving just yet.

As someone who is not only a motoring journalist but also a content writer you might expect I spend more time writing than talking. You would be wrong, sadly I am one of those people that simply wont shut up, it’s mainly down to the simple fact that I am enthusiastic about most things and this means I love banging on about anything and everything. Even at school, every single report I ever had said “talks too much”..well who cares, I like communicating and it hasn’t done me any harm, I don’t think.

Last week all this chatter finally came into it’s own when I was invited to talk on the Danny Pike show on BBC Radio Sussex and Surrey about my feelings on driverless cars. My feelings on the subject are mixed, as is the subject. It really isn’t a simple yes or no situation, the technology is at such an early stage we simply cant tell what form it will end up taking. Of course, small automated taxis for the city centre are not a bad idea at all, until they go a bit wrong of course. But at the speeds being suggested I don’t think it will be too much of an issue. My concern comes when we talk about motorways, or even A and B roads! That is a long long way in the future and, as such, should not really be speculated about. The other point that is no minor issue for me is that I get car sick when I am not driving. Yes, I know that is hilarious, but it is a fact, I think that’s why I love driving so much and developed such a passion for motoring.

So unless driverless cars come with a sick bag I am not going to be getting involved for as long as I am able to drive myself, but that doesn’t mean others wont benefit. In terms of talking on the radio, I loved it, I did very well by all accounts and have been asked to be available for future appearances…keep your ears out!

Its not long now until my first season of DMAX Karting begins with the Daytona Motorsport group. I am super excited but also very unsure of quite how badly I might be beaten! Some of the people in my “light” category are likely to be very good indeed, so watch this space to see how I do! 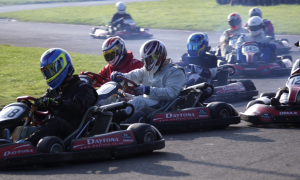 I will be writing up each race for www.motor-heads.co.uk so tune in to watch my highs and lows and eventual defeat!

I am actually really excited, to be part of a race season involving points and weigh ins etc is going to be fantastic…I can just about pretend I am a racing driver! I have also been training for this so if nothing else I am fitter than I was last year and hopefully a bit lighter too!

As you might imagine, I get asked to help people buy a second hand car quite a lot. I love doing it, I find the world of used car buying one of almost limitless choice. Its so much more fun than buying a new car, but people do fail to grasp some of the basics. 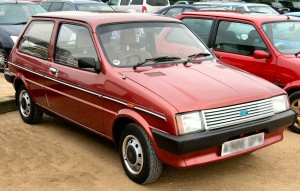 One of the biggest things people don’t get is this, If you cant afford a new BMW, why do you think you can afford to run a second hand one? I use Beemer as a example, but it stands for any high end car. Just because it was once a reliable and luxury car does not mean it will still be as good when it has done 140,000 miles. Thanks about it…someone sold that car because it had done too many miles, and they could afford to run it and buy it new! You cant, but still you take it on hoping you can have a slice of luxury for none of the price.

There are lots more ramblings on this topic in my head but this one makes for a simple point. Only look at cars you could see yourself buying new at some stage, the cost of the  parts and servicing etc often sit at the same level as the original cost. They don’t get cheaper to run…

I love winter, I even like challenging driving conditions so as the season changes I always get excited. However, I always forget the spectre of de-icing the car in the morning, it drives me mad. My wife insists on throwing boiling water over the windscreen of her car every morning which leads to me wincing and waiting for a bang and a visit from autoglass. I tend to be a “scraper” and rarely have gloves on so I get freezing cold hands and a long face!

Then once you are in the car its still freezing until the engine warms up, thank god I don’t really like diesels as they take an age to warm up, but still, the 5 minutes or so before I start to be able to see the road and feel my hands is always too long.

Such is life I suppose, until I can afford a car with a heated steering wheel!

I am really pleased to announce I am know a regular contributor for www.motor-heads.co.uk It’s a great website that is gaining some serious recognition, I hope to add to the already great content being written over the coming months.

My first post is one I put together in the light of being asked to join the Daytona Motorsport DMAX championships next year. This is my first competitive UK karting and certainly my first karting involving weight categories. I am really looking forward to entering and meeting all the other racers, but I wont lie, it’s going to be tough and I may well come last every month!

Keep an eye on motor heads for lots of great content and from Feb…my tales of woe from the back of the grid.

I think we are all looking forward to seeing a new track on the F1 one calender this weekend! I think its amazing the Marussia are only running one car out of respect to Jules Bianchi, however I wonder if there are some other motives. This is the team that pretty much binned off Max Chilton for cold hard cash only a few weeks ago, so perhaps it might just be cheaper to run one car!

Lets hope we have a safe but exciting race, new corners, new straights and lots of other unknowns will certainly make for an interesting weekend. I do love hearing past drivers waxing lyrical about legendary corners but it certainly mixes things up to have fresh turns and twists to test everyone!

Clearly everyone even slightly interested in motorsport is thinking about Jules Bianchi and there is very little I can add. However I felt the need to simply say we all know motor sport is dangerous and often people who know nothing about it like to make comments about risk and choice, these people should choose their moments to say this and not pass judgement at times like this.

I cannot profess to have met Jules but by all accounts he is a wonderful guy and I personally want to wish him and his family the very best and hopefully he can look forward to a speedy recovery.